A new review of “The Boys of Diamond Hill” has been published online at the website for H-Net, an international consortium of scholars and teachers. Their website notes that it reaches over 100,000 subscribers and that: “H-Net creates and coordinates Internet networks with the common objective of advancing teaching and research in the arts, humanities, and social sciences.”

This review is a tandem review of 3 books, “Bully for the Band!: The Civil War Letters and Diary of Four Brothers in the 10th Vermont Infantry Band,” by James A. Davis; “Tejanos in Gray: Civil War Letters of Captains Joseph Rafael de la Garza and Manuel Yturri,” by Jerry D. Thompson and of course “The Boys of Diamond Hill.” 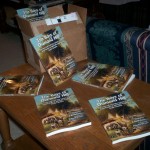 My Copies of Boys of Diamond Hill

The review is an even handed scholarly work which examines the strengths, weaknesses and contributions of each book. One thing the reviewer focuses on, not surprisingly, is slavery, but not to the disproportionate extent often exhibited. One thing he notes about “The Boys of Diamond Hill” that I had not really considered was that I did not make special note as to whether or not the Boyds were slave owners. I can almost certainly say that they were not. The Slave Census of 1860 and before has no mention of them. Also, the letters in which Fenton Hall and others in the family were making deals to have their land worked for them while away at war seems to support this. If Fenton had owned slaves, he would have had them work his land. If Robert Boyd, the patriarch of the family, had owned slaves he would have sent them to work Fenton’s land. As it was, Fenton’s land was first worked by his brother Davis Hall, then later by the 60 year old Robert Boyd himself once Davis was pressed into the military.

The reviewer sums up “The Boys of Diamond Hill” nicely in the following paragraph:

For Robert Boyd of South Carolina, the war showed little mercy, as J. Keith Jones’s The Boys of Diamond Hill makes clear. Born in 1804 in Ireland, Boyd moved to America, settled in South Carolina, and saw five of his sons and one son-in-law enlist in the cause of Confederate independence. By the end of 1862, three of his sons, William, Robert, and Thomas, had fallen in battle at places familiar to Civil War memory: Frazier’s Farm, Harpers Ferry, Murfreesboro. The following year his son-in-law Fenton Hall died in a skirmish with Federal troops in South Carolina. The deaths of his older brothers in battle apparently did not dissuade the youngest son, Andrew, from following in their footsteps, right to the grave, too. Having enlisted in early 1864, Andrew died in late May from wounds received at the Battle of the Wilderness. The sole surviving brother, Daniel, outlived by only five years the war that claimed the lives of half his family members.

On the whole, this is a nicely done and very fair review of my work. Such reviews help writers and historians improve their work with each effort. I wish to thank H-Net for sharing my work with their subscribers.

This entry was posted in Diamond Hill. Bookmark the permalink.