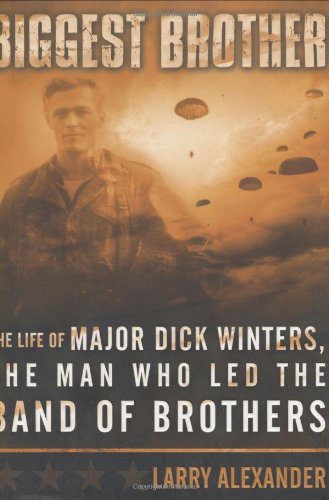 Biggest Brother explores the life of Major Richard Winters of Band of Brothers fame. Although this book is several years old, I just picked it up recently. I had read and loved both Band of Brothers by Stephen Ambrose and Major Winters’ own book, Beyond Band of Brothers. Prompted by Winters’ death, I finally read Biggest Brother. Using extra source materials not available to Ambrose – rediscovered letters Winters wrote to his wartime lady friend – Alexander’s book gives added dimension to the Winters story.

Whereas, Ambrose’s book gives the story of one company’s wartime experiences – of which Winters was a large part – and Winters book focuses mainly on the same story from his perspective with added insight into his leadership lessons, Alexander’s book does something different. It tells the complete story of a very private man. Alexander begins by covering Winters’ childhood in greater depth than the other works had. The war experiences provides deeper information about other officers that Winters served with and particularly covers Winters’ experiences with the other companies while serving as the commanding officer of the 2nd Battalion. Of course the meat of the book is the war experiences, but the delightful bookend to Winters’ childhood is the story of his life after the war. The reader is treated to the fuller stories that are only brushed over in the wrap up sections of the other two books. Among these are Winters’ time working for Nixon Nitration Works, how the Band of Brothers book came to be and his experiences working with Stephen Ambrose. Then the reader is treated to a behind the scenes look at the making of the mini-series and Winters’ interactions with Tom Hanks and the writers, including a major battle the old soldier fought with them over excessively gratuitous adult language. While not a full concession, Hanks actually did tone down the language to some degree to appease Winters after first vowing not to. After that the reader is taken along on trips back to Europe where Winters meets with old comrades and foes, then onto the Emmy Awards where Winters takes center stage.

For fans of either the book Band of Brothers or the HBO mini-series, Biggest Brother is a book that you should not miss. Even if you have not partaken in these, this book provides such a great window into the life of an extraordinary man that you are bound to enjoy it anyway.