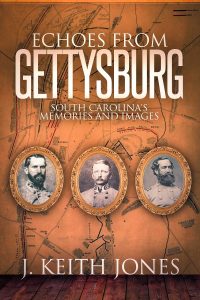 Echoes From Gettysburg: South Carolina’s Memories and Images is set for release on August 15.

Stay tuned for ordering information.  In the meantime, checkout the advance praise from the back cover:

Virginia often steals the public’s attention at Gettysburg, but J. Keith Jones’ research on the actions of all of the South Carolina units at that three-day battle brings that state to the forefront of battle accounts. This book fills in gaps for South Carolina descendants and history readers with letters, diaries and newspaper accounts. Get this book. You need it!
Clint Johnson – Author of numerous Civil War books including “A Vast and Fiendish Plot: The Confederate Attack on New York City” 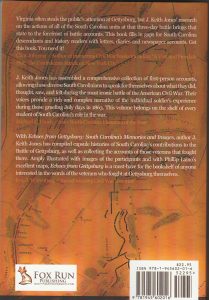 J. Keith Jones has assembled a comprehensive collection of first-person accounts, allowing these diverse South Carolinians to speak for themselves about what they did, thought, saw, and felt during the most iconic battle of the American Civil War. Their voices provide a rich and complex narrative of the individual soldier’s experience during those grueling July days in 1863. This volume belongs on the shelf of every student of South Carolina’s role in the war.
Michael C. Hardy – 2010 North Carolina Historian of the Year

With Echoes from Gettysburg: South Carolina’s Memories and Images, author J. Keith Jones has compiled capsule histories of South Carolina’s contributions to the Battle of Gettysburg, as well as collecting the accounts of those veterans that fought there. Amply illustrated with images of the participants and with Phillip Laino’s excellent maps, Echoes from Gettysburg is a must-have for the bookshelf of anyone interested in the words of the veterans who fought at Gettysburg themselves.
Eric J. Wittenberg – Award winning Civil War historian

This entry was posted in Echoes From Gettysburg - SC. Bookmark the permalink.