I recently had the pleasure of taking a trip to attend the Vince Dooley Leadership Conference at Kennesaw State University.  There were many fine speakers along with Coach Dooley, the legendary football coach of the national championship University of Georgia team in 1980.  It was a great joy experiencing this.

On a side trip into Atlanta, my brother and I got to visit Historic Oakland Cemetery right in the heart of town.  There are a number of notable Georgians buried there — Lt. Gen. (later Governor and Senator) John B. Gordon, golfing great Bobby Jones and Margaret Mitchell — to name but a few.  The sculpture known alternately as either the Lion of Atlanta or the Lion of the Confederacy stands guard over the unknown soldiers in the Confederate section. 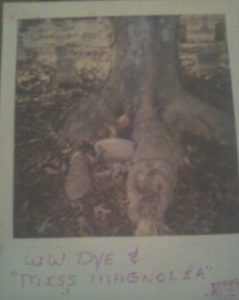 All great sites, but we had an even greater mission.  We have family in that section.  Wiley William Dye, the younger brother of my great great grandfather Thompson B. Dye was a private in the 9th Georgia Battalion of Infantry, Co. D when he became ill in 1862.  He passed away in the Fairgrounds Hospital near the cemetery on November 30, 1862.  Thanks to the efforts of Rachal Grizzle through the wonderful site, Find A Grave, I was able to locate this uncle’s final resting place.  It appears that the city or state had provided stones for the identified veterans at some point.  There were many uniform markers that appear to predate the Veterans Administration markers later provided.

There was a problem, however.  His grave rests at the base of a stately old magnolia tree.  The tree had greedily claimed the stone many years ago and had sucked it down into the ground.  The old Polaroid picture Mrs. Grizzle had posted on Find A Grave was taken in 1998 and has several inches of stone showing.  It is hard to tell, but it appears that some of the name might have still been visible.  Twenty years later, though, that was no longer the case.  Barely two inches of stone remained above ground and the name was then far beneath the soil.  Another decade and it would likely be gone altogether. 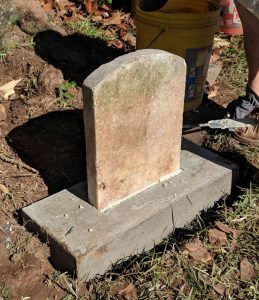 I enlisted the aid of the cemetery’s preservationists, Ashley Shares and Sean Diaz, to correct this and less than two weeks later, the stone was extracted, mounted on a new base and now signals that Wiley W. Dye is not forgotten. 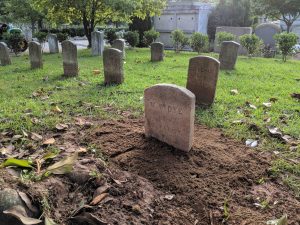 W.W. Dye grave now restored. Set in a base a safe distance from the tree.