As I take a moment to reflect on the carnage and the high human costs surrounding the anniversary of the most famous battle fought on American soil — the Battle of Gettysburg — I wanted to acknowledge the service of my ancestors who were present.  There were several relatives, but the most closely related were my mother’s grandfathers.  John Chapel Booth stormed Blocher’s Knoll (modern day Barlow’s Knoll) with the 38th Georgia Infantry, Co. H.  John U. Colvard of the 38th had been detached to service in the 2nd Medical Corps due to wounds received at Gaines Mill earlier.  He, undoubtedly, saw the worst any man could see, hauling the wounded from the field, tending their wounds and assisting the surgeons as they went about their grim tasks.  He almost certainly had to help hold men down for amputations and other painful procedures, trying to block out the screams.

Also there was Thomas Curtwright Jones of the 2nd South Carolina Volunteer Infantry, my great great great uncle. Also there was a man who I sometimes forget was not blood related, Daniel Boyd, whom I became so well acquainted with through the pages of “The Boys of Diamond Hill.” Daniel was wounded on the Rose Farm as part of the 7th South Carolina Volunteer Infantry and had to be left behind when General Lee ordered the withdrawal of his army from Pennsylvania.

Both of these men were members of Kershaw’s Brigade and were among those to whom “Echoes From Gettysburg: South Carolina’s Memories and Images” was dedicated. 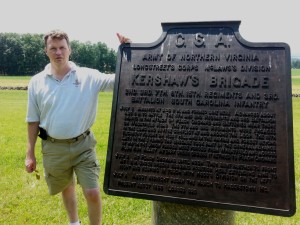 This entry was posted in Diamond Hill, Echoes From Gettysburg - SC, General Thoughts. Bookmark the permalink.