Faith of our Fathers 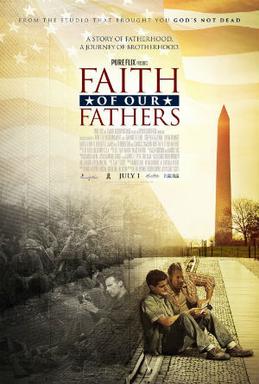 This weekend I got the opportunity to check out the new Pure Flix movie, “Faith of Our Fathers.” I don’t usually review movies, but sometimes I make exceptions for movies that will be ignored or unfairly mis-characterized by the media (usually purposely). These are normally either independent or faith based. In this case “Faith of Our Fathers” is the latter. I have to say that in years past, Christian movies often fell into the trap of being so eager to deliver their message that they frequently failed to tell you the story. As time has gone on, two companies producing these have gotten increasingly better at entertaining as well as delivering the message. These are the ones created by the Kendrick Brothers and by Pure Flix. Pure Flix notably produced “God’s Not Dead” last year.

David A. R. White who played a pastor in “God’s Not Dead” and Kevin Downes, who played a deputy sheriff in the Kendrick Brothers “Courageous” star in this “buddy movie” about an unlikely pair connected by one thing alone… the deaths of their fathers in Vietnam. Downes as John Paul George (like the Beatles – a running joke in the movie) knows little about his father who was killed in 1969 in the war. A letter talking about his friend Eddie Adams sets John Paul in motion to find this man and learn the rest of his father’s story. He travels from California to Alabama to find him only to discover that Adams is also dead. Instead he finds Adams son Wayne played by White.
The two men could not be more different, but the ne’er-do-well Wayne – hoping to profit – leads John Paul on an adventure of discovery to the Vietnam wall in Washington, DC. Also starring are veteran actors Stephen Baldwin and Candace Cameron Bure.

Often Christian films are very predictable and most road trip and buddy movies have some predictable elements, but this one has a few surprises up its sleeve, including a pair of hitch-hikers and a state policeman who is not what he first appears. At the end of the day, you will be glad you took the time to discover this fine film.

This entry was posted in Movie Reviews. Bookmark the permalink.