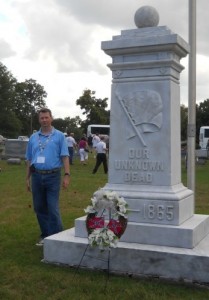 While visiting Murfreesboro, Tennessee, I had the opportunity to take a tour that took me to the Confederate Circle in the Evergreen Cemetery. Here lie over 2,000 Confederate soldiers whose remains had been taken up from the battlefields around Murfreesboro. Among these are the soldiers killed on New Year’s Eve 1862 at the Second Battle of Murfreesboro, also known as the Battle of Stone’s River.

Among this number would be Thomas Boyd who Captain Robert Chatham — Thomas’s commander in Company G, 19th S.C. — reported was shot in the head and died instantly. Thomas was buried on the field with his fallen comrades.

Presuming his remains were recovered; he was moved first in 1867 to the original Confederate cemetery and then were moved twice more, the final being at this location. This marks the fourth of the Boys of Diamond Hill, whose graves I have been honored to visit.

To learn more click on the “Diamond Hill” link. To buy the book you may go to any major online retailer such as Amazon or Barnes and Noble, or you may buy it directly from McFarland Publishers. “The Boys of Diamond Hill” is also available for the Kindle.

This entry was posted in Diamond Hill. Bookmark the permalink.