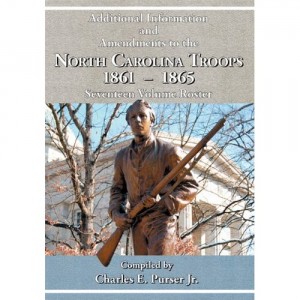 For those with deep North Carolina roots, there is now another good resource. Those with Confederate ancestors in N.C. who have studied their genealogy are doubtlessly familiar with the original 17 volume roster set. Well, now there is a an addendum to this set. I was talking recently with Chuck Purser, the author of this valuable work. Countless hours of deep research went into adding to this body of work. If you have NC Confederate blood in your line, this research is not to be overlooked. The October 2010 North Carolina Historical Review
North Carolina Office of Archives and History had this to say about Purser’s book:

Anyone who has sought information on a North Carolina Civil War unit or soldier is familiar with the series North Carolina Troops, 1861–1865: A Roster, which presents a history of each unit and a service record for each soldier. It has been a massive effort of compilation and analysis over nearly fifty years; seventeen volumes have been published, and another four are expected. Researcher Charles E. Purser Jr. has for many years provided valuable and highly reliable information to the editors of this series. But Mr. Purser found so much previously published data that he decided to release his own book of addenda to the series, Additional Information and Amendments to the North Carolina Troops, 1861–1865, Seventeen Volume Roster (2010).
As Mr. Purser points out in his foreword, the Internet has greatly expanded the availability to researchers of original materials regarding these soldiers. Until just a short time ago, research in census records and National Archives prisoner-of-war records required time-consuming examination of microfilm reels, some of which were not readily available, and some of which were barely legible. Now they are readily accessible through Web sites such as Ancestry.com, which proved to be Mr. Purser’s most valuable tool. But properly applying these resources to a work of the dimensions of North Carolina Troops requires great dedication, knowledge, and analytical ability. Mr. Purser clearly possesses these qualities. He has also examined numerous other sources, and his new book presents hundreds of additions and amendments to soldiers’
service records. The most substantial of Mr. Purser’s amendments are lists of causes of death for soldiers who died in various prisons. Thousands of descendants can now satisfy their curiosity; hopefully, they will not be disappointed if their ancestors died of chronic diarrhea rather than a gunshot wound. Mr. Purser further states, “Another advantage to the current researcher is the ease of using computers in sorting and manipulating the data to see it at different angles”
(p. iii).Mr. Purser has used these methods to identify soldiers who have been placed in incorrect units, or erroneously listed twice because of discrepancies in the spelling of their names: Pvt. J. W. Armstead, for example, was the same man as Pvt. James W. Olmstead, and the latter spelling is the correct one.
Mr. Purser does not claim to offer the last word on these soldiers, any more than the editors of the North Carolina Troops series make that claim. In fact, the editors have long been collecting supplemental information and expect to publish two thick volumes of addenda after the series is finished, but that is years in the future.
Mr. Purser, after years as an analyst in the U.S. Air Force, served as lead researcher for the Confederate Cemetery in Raleigh, where he researched the names, units, and death dates of 1,400 soldiers for placement on their tombstones. In this task, he made much use of the North Carolina Troops series. With his new book, Mr. Purser gives back to the Troops series in a big way. Order Additional Information and Amendments (165 pages; paper; $30.00, plus $5.00 shipping and handling) from Scuppernong Press by visiting www.scuppernongpress.com or calling (919) 779-5888.—MATTHEW M. BROWN, Historical Publications Section, North Carolina Office of Archives and History.