Review – We Ride a Whirlwind 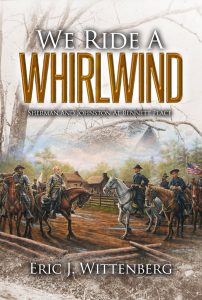 For so many, their knowledge (if they bother to have any) of the so-called American Civil War ends with Lee’s surrender to Grant at Appomattox Courthouse, Virginia. What most don’t know is that there was still a much larger contingent of Confederate troops in the field that those surrendered by Lee. Most belonged to the Army of Tennessee (not to be confused with the Union’s Army of THE Tennessee – Southerners prefer land and the Union army seemed to prefer bodies of water for naming purposes for some reason) which was under the command of Gen. Joseph E. Johnston for the second time in its life.

“We Ride a Whirlwind: Sherman and Johnston at Bennett Place” is the first comprehensive work dedicated to the War’s largest surrender. Eric Wittenberg provides great detail of the three meetings between Maj. Gen. William T. Sherman and Gen. Joseph E. Johnston in which they negotiated the surrender of the remaining Confederate forces east of the Mississippi River. He wraps the events leading up to the meetings, the events of the meetings, the dynamics within the Confederate army and government and the fallout into his usual smooth narrative. Included are appendices covering the forces involved, Lincoln’s meeting with Sherman, correspondence within the Davis administration and the sub-plot of Lt. Gen. Wade Hampton and his dilemmas surrounding the surrender.

The surrender of Johnston’s forces was not a fait accompli, in fact, there was a very real possibility that he could flee to the mountains with his army or head south to Texas or west to continue the war on a guerrilla basis. Johnston did not want this any more than Sherman did, but the terms had to be acceptable before surrender was an option. Sherman took this knowledge and fear into the first meeting. He also carried another piece of information that neither Johnston nor the members of either army knew, the assassination of Lincoln. Sherman knew that once this became common knowledge, the behavior of his army would become worse and his odds of reaching an accord would lessen. He had a strong incentive to act quickly and the directives that Lincoln himself had given to guide him. Wittenberg does yeoman’s work in communicating the complex interactions that resulted in the final meeting and aftermath.

Beautifully illustrated with photographs and maps, this book takes you into the events of April, 1865 at the Bennett farm then brings you forward to the present. This book is a must have for any serious student of the Civil War.