Bennett Place – Appomattox was not the only surrender 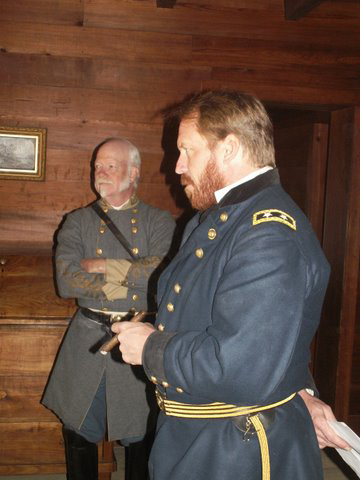 Eight days after the surrender of Lee’s Army of Northern Virginia on April 9, 1865, negotiations began between Maj. Gen. William T. Sherman and Gen. Joseph E. Johnston at the home of James Bennett near modern day Durham, North Carolina on April 17. On April 18, 1865 terms of surrender were signed. Johnston’s Army of Tennessee had formally agreed to cease the conflict. A vengeful government in Washington rejected the terms as being too generous and Sherman and Johnston returned to the table. The official final surrender was signed on April 26, 1865.

Daniel Boyd and James Alewine of the Boys of Diamond Hill awaited these events in Greensboro, N. C. after having retreated with Hardee’s Corps through the Carolinas. There would be more surrenders of Confederate soldiers culminating with the surrender of Brig. Gen. Stand Watie, a chief in the Cherokee nation. On June 23, 1865, he finally recognized the futility of continuing to fight and surrendered his battalion of Creek, Seminole, Cherokee, and Osage Indians to Lt. Col. Asa C. Matthews at Doaksville near Fort Towson in the Oklahoma Indian Territory. The very last surrender, however; was the surrender of the CSS Shenandoah in Liverpool, England on November 6, 1865.  Johnston’s surrender at Bennett Place was the largest of all by far and symbolically, if not effectively, ended the war.  After the second of the two main armies had laid down their arms and left the field, there was little pretense that the Confederacy held out any hope of military success.

The staff of the Bennett Place put on a wonderful preliminary event on Saturday, April 18, 2015 at which I had the honor to be one of the featured speakers along with Eric Wittenberg, Michael Hardy, Lee Sherrill and Wade Sokolosky. They will be hosting an even greater and larger event on Saturday April 25 and the final stacking of arms Sunday April 26.

As I conclude the Sesquicentennial series that followed the Boyd family of the Boys of Diamond Hill through the war, I would like to extend a special thanks to John Guss and his fine staff at the Bennett Place. Throughout the last four years, they have allowed me several opportunities to share this story with their patrons. Their fine site is one of the most overlooked jewels in the North Carolina — if not southeastern — crown of historic sites. If you are passing through this area, you owe it to yourself to stop in and walk the lane where Joseph Johnston and other generals like Wade Hampton rode with heavy hearts knowing the end was at hand. Surrender was inevitable and the time had arrived. The Bennett farmhouse where the meetings took place has been painstakingly recreated. Standing where they stood and realizing just what happened there is sure to reach into your heart.  Your study of this conflict is not complete without a visit to the Bennett Place.

This entry was posted in Appearences, Diamond Hill, Sesquicentennial. Bookmark the permalink.