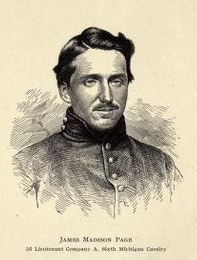 I suppose some people just can’t be bought. Such appears to be the case with Lt. James Madison Page, formerly a sergeant in the 6th Michigan Cavalry in that little dust-up popularly called by the misnomer, “Civil War.” He wrote his remembrances forty years after being an inmate at one of the worst places on planet Earth to have spent the year of 1864… and that applies whether you were an inmate or a guard, or for that matter the commandant.

You see, there is in human nature the tendency to not want to deal with anything more complicated than can be boiled down to one scapegoat. Such as blaming all the sins in American history on the Southern white male Christian – particularly those who participated in the Confederate army or government – and all the suffering in Camp Sumter at Andersonville on Major Henry Wirz. By doing this, all the rest are rescued from having to examine their own flawed souls. In the case of Andersonville, this saves Secretary of War Edwin M. Stanton and the federal government from the part they played by halting the prisoner exchanges. It saves the prison gangs that preyed on the weak among their own people – beating, robbing and sometimes even murdering their fellow Union prisoners – from being examined by history. It saves the Lincoln administration from sharing the blame for the privations suffered throughout the South due to the blockade. As a result the entire South suffered from lack of food and clothing. If an entire nation is suffering, how can it be expected that their prisoners will fare any better? Page did not particularly like Gen. John Winder, the commander of the entire fort and therefore the commanding officer over then Captain Henry Wirz, but Page did not even blame Winder for the shortages. He understood that one cannot give you what he does not have.

It is part of the human condition that most people want to be seen as being on the “right side” of an issue, therefore probably 90% of our species will jump on a popular bandwagon. Such was the case following the war with Andersonville. Through this book we discover that Jim Page was willing to be among the 10% that would tell the truth even when it was not popular.

The heads of the federal government wanted nothing more than to be able to put a noose around the necks of Jefferson Davis and Robert E. Lee. Anyone who has watched either police dramas or documentaries knows that the best way to reach someone at the top is to pin everything on someone in the middle and offer him a way out by selling out your real target, whether true or not. Such was the case with Henry Wirz. Wirz was offered the opportunity remove the rope from his own neck and place it on the necks of Davis and Lee by saying that the high death rate at Andersonville was coordinated from the very top. Wirz refused to do this.

In this book Page, a genuine Union war hero and eye witness to most of what went on there, gives the unvarnished and full account of life in Andersonville. Although it is convenient to blame the commandant of such a hellish place, he aviods doing this. You see, Jim Page often served as the emissary for his group of prisoners to Wirz. He was terrified the first time he was sent forward to speak on behalf of his group, but quickly discovered that Wirz was not the monster that those who did not know him feared, instead in Wirz he found a man almost as much a prisoner of his own position as they were of theirs. Wirz often went out of his way to help Page and other prisoners, but so often there was little he could do. Nonetheless, the northern people cried out for punishment to satisfy their bloodlust against the South and someone had to pay. Wirz was the designated sacrifice selected to fill this role.

James Madison Page sums it best in one of his opening statements, “I have never seen a pretty jail any more than I have seen a pretty coffin.” Prison is never a good place to be, no matter what type it is nor why you are there. If you want to know the truth about Andersonville, read this book.