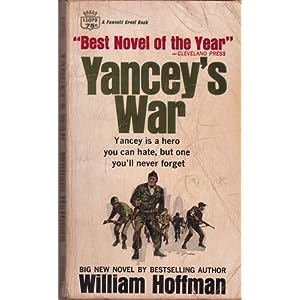 This book was first published in 1966 and was called the “best novel of the year” by the Cleveland Press. I don’t know if that translated it to a best seller status, but it should have. “Yancey’s War” is a really great read. The late William Hoffman brings you right into the military world of the second world war. Not so much on the combat side, but totally in the aspect of boot camp and camp life; and something I have not seen fully depicted elsewhere, Officer Candidate School.

You see OCS referred to often in literature and entertainment, but almost always in the context of a successful combat officer whose exploits on the battlefield takes center stage and usually just referring to his having been to OCS. Hoffman takes you inside OCS and shows what it is like for those who don’t make the cut and have to return to enlisted life. Also books and movies almost never depict life stateside, rather opting for the more colorful scenes from the war front. One reason being that it takes an exceptionally gifted writer to make the mundane interesting. William Hoffman was exactly that kind of writer. 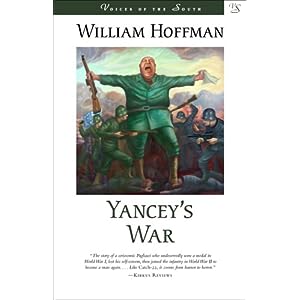 “Yancey’s War” is told from the perspective of its narrator, Charles Elgar. Besides the war itself, the prime driver of this story is the love-hate relationship between the narrator and Marvin Yancey. Charley – as he is called by Yancey – first encounters Yancey in boot camp. Everybody knows a Yancey and odds are if you don’t then you likely are a Yancey. Yancey is the kind of person for whom even disaster and failure ends up gold-plated. He is short, fat and well past enlistment age. He’s pulled strings and paid bribes to get into the army. He can’t successfully run the obstacle course and by all rights should have been packed up and shipped home. There’s one problem, Yancey is a war hero having won the Distinguished Service Medal in the first world war. Charley will learn that Yancey didn’t deserve the award, having won it for an act of cowardice that was misinterpreted as heroic. As a result Yancey has his way paid through college – by grateful parents of a war buddy – and stumbles into a business partnership he capitalizes on and even a marriage to a trophy wife. Now Yancey sees this war as his last chance at redemption and will stop at nothing to achieve it. As a result the loud and obnoxious Yancey is universally hated by all except for the senior officers he successfully brown-noses.

In the course of the war, the characters are never assigned a combat role, but will eventually be forced to fight for their lives because of an officer who can’t successfully read a map. The gripping final sequence leaves you wondering just what you would do if presented with the same set of circumstances. Now that I have discovered William Hoffman, I am sure this will not be the last of his books I will read.