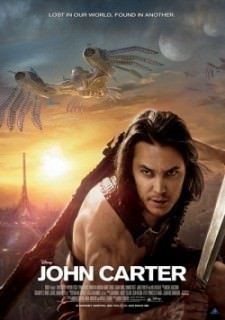 I went to see the best movie that nobody else watched this past weekend. John Carter (the “of Mars” part was unadvisedly dropped from the title) is a 250 million dollar movie that grossed only 30 million on its opening weekend. That is a real shame because it is a good movie. Nonetheless it is being endlessly debated this week as to what went wrong. Like this article in the L.A. Times.

For this one I did something I usually resist… I decided to do the 3D thing. Quite entertaining in this manner. John Carter is a visually pleasing movie with a fast moving story. The director — Andrew Stanton — naturally took liberties with the original story, but I have to agree with his words from an interview I watched where he said that he tried to stay true to the main characters. The movie is primarily an adaptation of the first book in the John Carter series by Edgar Rice Burroughs, “A Princess of Mars.” The most interesting thing Stanton did was to borrow part of the story line from the second book, “Gods of Mars.” He also expands the role of the Therns who do not make their appearance in the books until the second book, but the changes he made helps explain how Carter’s magical trip to Mars/Barsoom came about.

The less informed have groused about elements in this movie that bear similarities to other movies such as Star Wars. What they are not aware of is the fact that Edgar Rice Burroughs thought of these things first, many decades before the others who borrowed them from him.

On the whole, I found John Carter to be a fun movie that deserves to be seen. Ignore the stuffy Hollywood critics and check it out. I predict that in the years to come it will become a cult classic that many people will endlessly bellyache about there being no sequels to. Well, if that happens it will be a result of the low box office numbers. There is an excellent 10 minute teaser clip you should check out for free. This one is from the beginning and shows more of the Earth side of the equation. For a good clip of Carter fighting the white apes on Barsoom, check out this clip.

Do yourself a favor and go see John Carter this weekend.