The God Virus by Skip Coryell 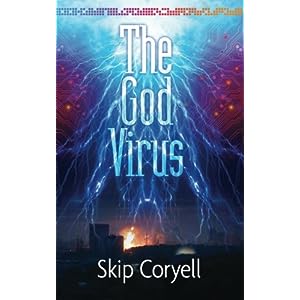 What if the lights suddenly went out all over the world as if God just flipped the switch. That is a question “The God Virus” makes you ask. What would you do once the panic set it and it was “every man for himself?”

“The God Virus” is the first of a planned trilogy. Dan Branch is a man at a crossroads in his life living in Wisconsin when the chaos strikes. Before the lights go out he receives a coded text from his Uncle Rodney in Michigan. Uncle Rodney is a survivalist who has spent his entire life preparing for the worst and had hoped to do the same for his nephew he took in at the death of his brother. Having grown up in that environment, Dan has a few tricks up his sleeve. Rodney’s text is a code for Dan to drop everything and come home to Michigan. Of course for Dan this is not nearly that simple. There is the matter of Dan’s philandering wife and his step son to whom Dan is the only father he has ever known.

“The God Virus” is a struggle for survival that prompts a great deal of self examination. What would you do if the modern world we have all come to depend on was suddenly plunged into a brand new dark age? How would you make do when the trucks quit running and the supermarkets all shut down. Even more important, what would you do when others equally unprepared decide that your provisions are fair game? This book is a compelling read and Coryell’s best effort to date. It will leave you hungry for the next installment.

One Response to The God Virus by Skip Coryell